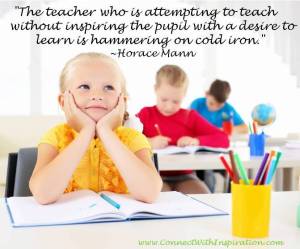 As I remember, I was just getting back home after a long day of teaching and coaching. It was around 2005 and I had been teaching and coaching for almost 10 years at this point. Every day, I loved that my life was filled with a passion to teach, a classroom of passionate learners, a passion to coach, and players who were passionate to learn. Very few people understand how fulfilling life can be when you have these things. I believed that I had it all, and that I was emotionally “on top of the world”!

That is, until this day. Upon entering my house, my wife greeted me with a message that would end up driving my passion for teaching further than I ever thought it could. It was a very simple message that started it all, “You need to call- Mrs. Stone. Here is her number.”

“Mrs. Stone? Who is that?” I remember stating. My wife gave me little information, other than it was important to call back, it had something to do with a past student. Stone? Could only be David Stone, and exactly like a parent getting a phone call about their child, the thoughts rolled into my mind- Is he ok? Does he need my help? Has something tragic happened to him? Why would his mother be calling me? What had happened? …… You see, David was a 5th grade student of mine at Anastasia ES in Long Branch. He wasn’t a struggling student. He was one of my top students. One of those students with great parents and a solid foundation to be successful. But that was 5 or six years prior and by my calculations he would be a Sophomore or Junior in HS. What could have happened? I had moved to another district shortly after he graduated from my class and I was in the midsts of stamping my footprints at VMES in Brick, NJ. While I always thought (and continue to do so) of past students and how they are doing…. getting a call like this was troubling.

As soon as I was able to make contact with Mrs. Stone, my fears were put aside when she assured me that everything was alright. We had a couple minutes of updating conversation, followed by the reason for the call. She would have rather had David personally call me, but he was busy and since time was of the essence, she was making the call on behalf of him. David was doing extremely well both academically and athletically, and he wanted to ask for my attendance during his induction into the National Honor Society. Each inductee was to choose the person they felt was most influential in their academic career, and ask for their attendance. While the choice to be in attendance was an easy one, I did not know the impact it would have on me!

I don’t remember how many days went by before I was to attend the ceremony, but I do remember feeling on cloud nine just for the fact that a student chose me, out of all his teachers, parents, coaches, and role models, as the one who most influenced him! That knowledge, in itself, is what makes it all worthwhile! It was great to be able to talk with colleagues about these recent events. It was a great drive back into Long Branch, and it was great to walk into an auditorium and see colleagues and parents that I hadn’t seen in years, but nothing prepared me for the moment that David stepped up to the microphone, not just to be inducted, but to make a speech about his “Person Who Influenced Them”.

As teachers, we always talk about  inspiring students, providing safe learning environments, and being positive role models, but what Mr. Stone taught me was that even 3 simple words could change the world for my students. It is not about a special project or a well developed lesson. It is not about the homework, classwork, or the ten page paper. It is not about a passing grade, benchmark tests, or standardized tests. It is about THE STUDENTS! I learned that I had to be cognizant of EVERYTHING I said and did around my kids. Mr. Stone inspired me to be a better teacher not just everyday, but every second of every day in the classroom!

While there were many factors in education that were out of my control as a teacher, when students entered my class, they became my kids. I had control of this, and my expectations of them. I believe that when teachers have high expectations, treat students fairly, and support them as individuals- the students will have the same for you as a teacher! Inspiration is a two way street in a well designed classroom!

I thank you, Mr. Stone. It was my passion to touch every life that became a part of my class. It was a privilege to have touched yours. It was inspiring for you, my student, to have touched mine!

I am looking for submissions from anyone willing to share your stories of inspiration in Education!!

This site uses Akismet to reduce spam. Learn how your comment data is processed.